Our mission, history, and how to keep in touch. 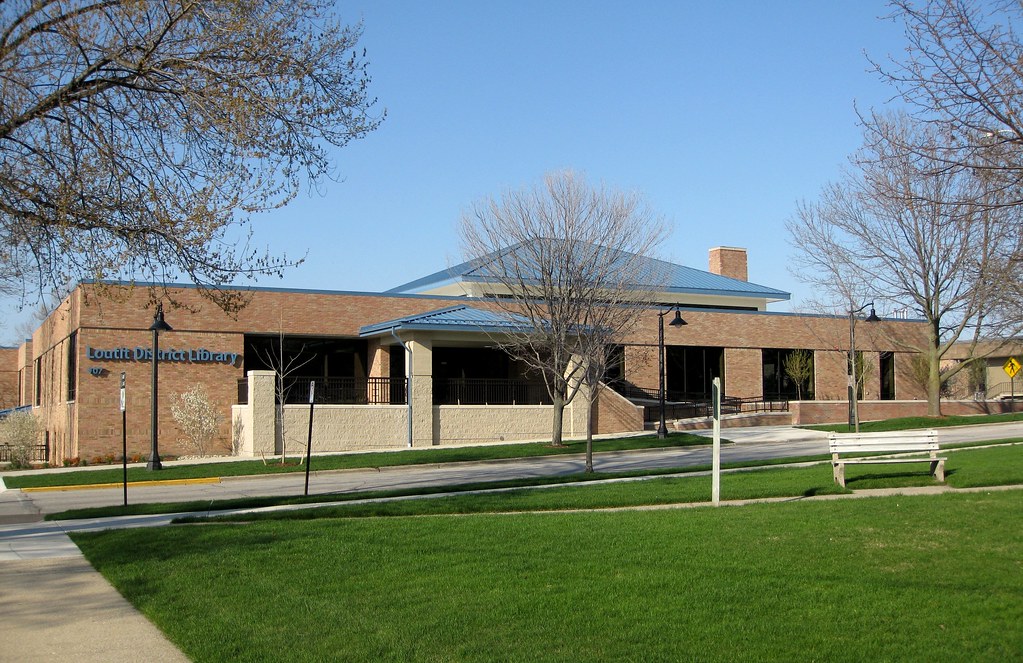 Our Library Trustees are our busiest volunteers! See when they meet, what they’ve accomplished, and how it fits with our mission. Library Board meetings are open to the public. Learn more. 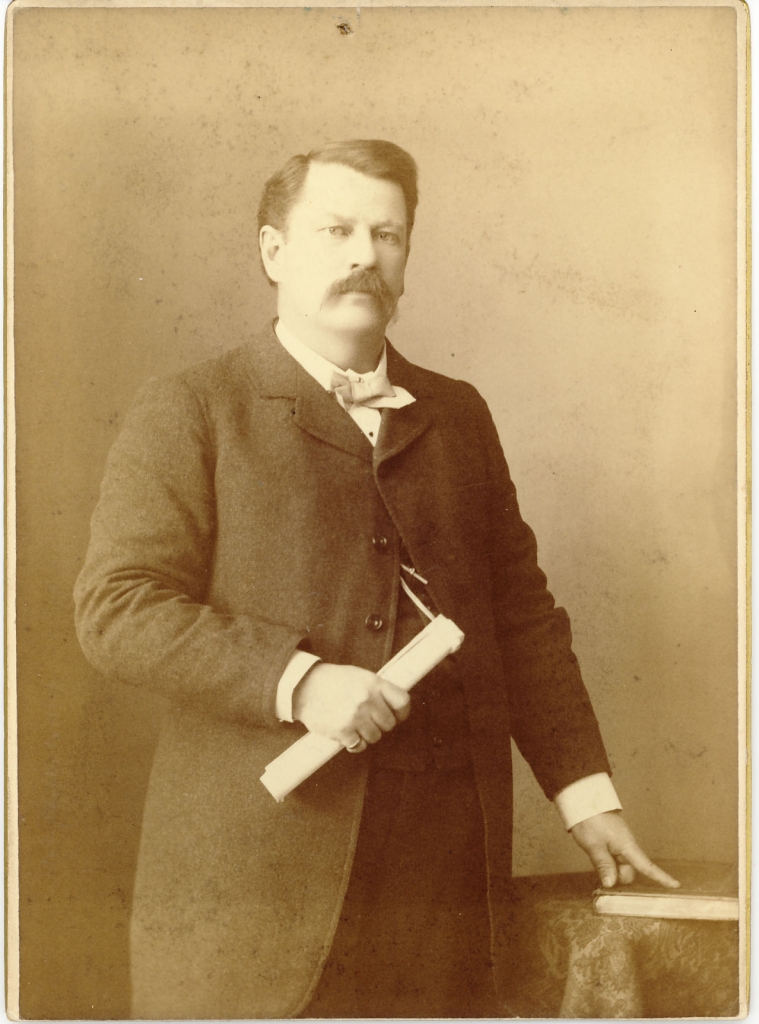 At a time when books were highly prized and not readily available, mining investor Edward P. Ferry opened a room above his office on First Street for the purpose of reading and lending books.  He became the President of the Grand Haven Library Association, the first public effort to establish a city library. In 1882, according to a record book kept by librarian Miss M. Stark, membership dues to the Association were set at $0.50 per year. Books could be borrowed for a fee of $0.10 per week.

When Ferry’s collection outgrew the space, the Association moved it to the Masonic Lodge, located over the Orpheum Theater at 16 Washington Ave. From there, it was moved in 1882 to the upper floors over the VanderZalm Novelty Store at 208-210 Washington, when more space was needed. But as the town grew, so did its love of books. 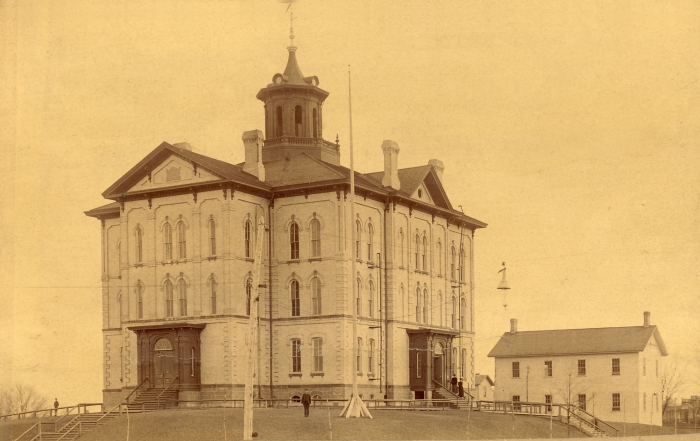 In 1870, Central School was erected on the corner of Franklin Avenue and Sixth Street, housing grades 5 through 12 and a library. The library was situated on the second floor and by 1891 contained 2,300 volumes, including the books from the Grand Haven Library Association. The library was open to the public Wednesday and Saturday afternoons.

In one spectacular hour on March 5, 1901, the three-story school building was destroyed by fire. From 8:30 to 9:30 pm, the glow from the blaze was noted as far away as Grand Rapids. Authorities believed it was one of several incidents of arson, a previous one being successfully thwarted on December 28, 1891. This time, 30 years of library growth was forever lost. The library portion of the property was insured for $2,000, less than a third of what it was worth. At that time, the library housed about 4,600 volumes.

On April 22, 1901, members of the Grand Haven Woman’s Club organized a ball as a fundraising event to start a new library in the new school building soon to be erected. Held at the Opera House, tickets were sold for $1.00 per couple or $0.50 to ladies. Newall’s Orchestra of Grand Rapids got the crowd on the dance floor.

In 1899, D.A. Lane of Lane’s Bookstore organized a circulating library with over 100 of “the very latest and best books,” according to an article that appeared in the Grand Haven Tribune after the fire. By May 1901, his collection had grown to 200 books, which were available to members of the library, who paid an annual membership fee of $1.00. After Central School burned down, Lane offered to donate to the new public/school library, upon its completion, the circulating library collection. But there was a catch: 100 new members had to join the circulating library by July 1. And for every 100 folks who joined after that, he would offer 100 additional books to the library.

Sadly, no record survives of the success or failure of these two fundraising efforts. The library reopened in the new Central School, but the Grand Haven Woman’s Club wasn’t finished yet. 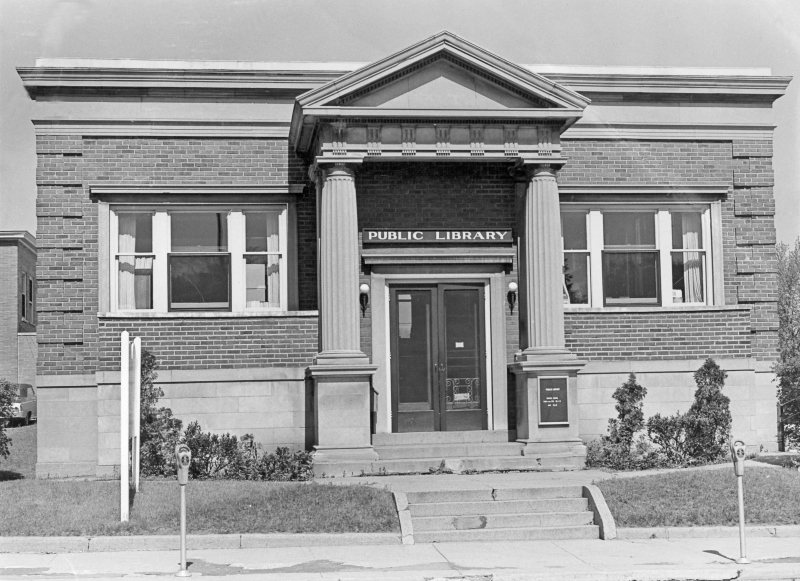 Andrew Carnegie’s program to provide public libraries was in full swing by 1900, and Grand Haven set out to obtain one. Carnegie asked only that a town show the need for a library, provide a site, and agree to his formula of annually allotting 10% of the construction cost for operations. City population was the main factor considered in the size of his gift.

In 1902, the Woman’s Club wrote eloquently of Grand Haven’s need for a library accessible to all, and soon Carnegie’s secretary offered Grand Haven a gift of $12,500. Plans came to a sudden halt in 1903, as the city’s proposal to place the library in Central Park was fiercely opposed.

In 1904, Grand Haven’s idea to allow Carnegie to buy a large house to use as a library (and rent out spare rooms on the side) was nixed by the philanthropist.

Good news in 1905! William Loutit wrote with news of a windfall: former resident Webster Batcheller had left $10,000 to the city for a library. The Carnegie grant was lowered to $5,000; Grand Haven proposed it be reinstated, to construct a $20,000 library. This was not granted, and correspondence with Carnegie ceased for a time.

Batcheller’s will, however, had a time limit: the city had two years to erect the library.  By the summer of 1906, the deadline passed. Batcheller’s nephew, Charles W. Shippey, felt badly. He talked of creating one anyway, to be called the Shippey-Batcheller Library. That August, Shippey died in a train accident, leaving a widow and two children. Grand Haven had lost the $10,000.

Dr. Elizabeth Hofma took up the cause again in 1911. She wrote to Carnegie and received no answer. She persisted and James Bertram, Carnegie’s private secretary replied that “This Library matter for Grand Haven, Mich., has been taken up on four separate occasions since 1902….” Letters flew back and forth between Hofma and Bertram. She described losing the money from the will (“the people indignant but helpless”), and he asked for proof.  Bertram agreed to reinstate the $12,500 offer. However, he said, “Mr. Carnegie can only consider the matter on receipt of an official application from the City Council and signed by the Mayor.” Bertram’s instructions were followed.

A site was provided in 1912 and an architect hired. Delays brought them to winter time, and construction took place in 1913. Finally, in January 1914, Grand Haven had its Public Library.

The Carnegie library served Grand Haven for over fifty years, when it once again experienced growing pains. A badly-needed extension was never built, although the city purchased land adjacent to the building in 1946. The Carnegie building was razed in 1968, along with the Post Office, for the Security First Bank. The site is now the parking lot for Fifth Third Bank. The Local History and Genealogy Department of Loutit District Library is now home to some of the original seating, tables, shelving, books, maps, documents, and photographs from the Carnegie Library. 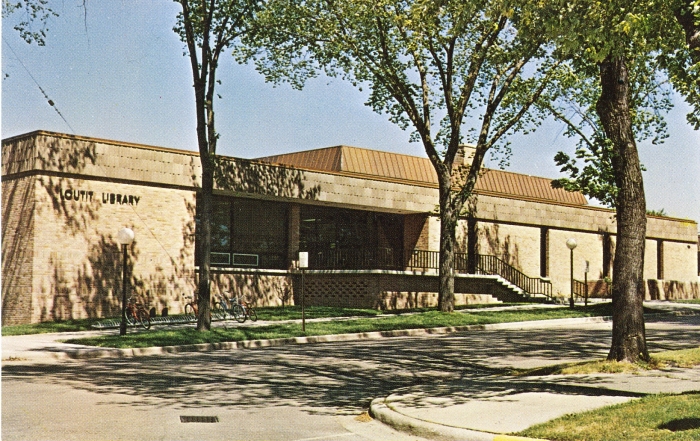 By 1959, the Library had outgrown its cramped quarters in the Carnegie building. Head Librarian Elisabeth von Oettingen spearheaded the needs assessment for a larger facility. The study led to the idea of constructing a library and community center complex on the north side of Columbus Avenue.

Meanwhile, the Loutit Foundation had taken an interest in the quest for a new building and went about acquiring property in the block bordered by Columbus and Fulton Avenues and Fourth and Fifth Streets just north of Central Park. In 1965, the Loutit Foundation gifted the city the land and additional grants to construct and furnish the library half of the project. One grant of $80,000 was intended to cover four years of the library’s operating costs. The total cost for the new library was in the neighborhood of $663,000. The Loutit Foundation’s contributions, including the value of the land, totaled over $1,141,000. Jinkling & Lyman from Birmingham, Michigan, was awarded the architectural contract. Construction started on March 16, 1966, by Erhardt Construction of Grand Rapids.

In June 1967, Loutit Library began operations as a department of the City of Grand Haven. It was expected to accommodate the needs of the community for fifty years, but no one could have anticipated the rapid population growth of Ottawa County or the impact of technology. When the library first opened, comfortable seating throughout the library could accommodate almost a hundred visitors. By the end of the century, most of the couches, tables, and chairs had been squeezed out to make room for growing media collections in a dizzying array of formats. The Local History and Genealogy Department was relocated to make room for a busy computer lab. The lab, too, soon had to be relocated to accommodate increasing demand for more workstations. 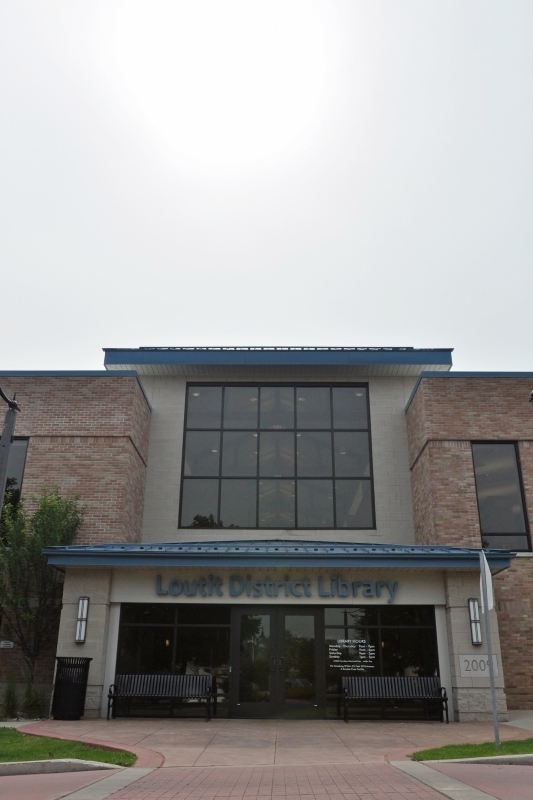 In 1998, citizens from the City of Grand Haven, Grand Haven Township, and Robinson Township formed a committee to pursue the formation of a district library, eventually including the Grand Haven Public School district, which brought in the City of Ferrysburg and part of Port Sheldon Township.  On February 24, 1999, Loutit Library was declared a district library by the State of Michigan.  On April 18, 2000, the voters of the district approved a millage of 1.0 mill in perpetuity, assuring the availability of funding for operation and expansion on an on-going basis.  The Library ceased to operate as a department of the city and became an autonomous entity on December 1, 2000.

In the summer of 2002, the Loutit District Library Board of Trustees approved the purchase of a 9.29 acre parcel at 715 Robbins Road. The Troyer Group of Mishawaka, Indiana, was hired to design a new 50,000 square-foot facility on this site, the back part of which, being deemed environmentally sensitive, was to be a natural preserve with walking paths.  Total cost for the project was estimated at $12,118,054. The Grow with Us Capital Campaign raised $1,400,000 from community contributions, and in May 2004, district taxpayers were asked to approve a bond proposal in the amount of $9,865,000.  Many voters preferred to have the library stay downtown and the proposal was defeated.

The Board of Trustees immediately began exploring options to renovate and expand the library at its current site. One idea considered was to purchase the Community Center and connect the buildings.  The concept was eventually dropped due to the concern of relocating the Community Center and its functions. The library building was purchased from the city for $1 and a new capital campaign was launched.  In the fall of 2006, the Board proposed a new 21,500 square-foot addition extending out over the old parking lot.  The addition created a parking garage, the Youth Wing, as well as room for the audio-visual collection, a comfortable lobby, large restrooms, refreshment lounge, administrative offices, and staff work areas.  The old building was completely gutted to house the Adult Wing with double-sided fireplace, quiet study rooms, the Local History and Genealogy Department, reading area, copy center, public computing center, computer classroom, program rooms, and Cheapstacks Used Book Store.  The main entrance orientation was changed from Columbus Avenue to Fourth Street.

The estimated cost for the proposed project was $11,442,000.  Accumulated library savings of $1.8 million and over $1 million in donations brought the cost down for voters.  In May 2007, voters approved the$3.425 million bond issue to be paid off over 20 years.  The Troyer Group was retained for the project, and in March 2008, Triangle Associates of Grand Rapids broke ground.  The Library was temporarily relocated to a former Save-a-Lot store on South Beacon Boulevard during construction.  Jim Snyder’s house at 333 Columbus Avenue was relocated to Fulton Street to allow for an additional parking lot.  On July 1, 2009, Loutit District Library reopened in its new mission-style home.  Due to favorable construction climate, the project cost finished at just over $10 million.

LIBRARY DIRECTORS – PAST AND PRESENT